Welcome to the roundup of the best new Android games that went live in the Appvn or were spotted by us in the previous week or so. Let’s check out!

Chicken Police – Paint it RED is the latest port from HandyGames. This is a quirky noir adventure staring characters sporting animal heads that are placed on top of human bodies. The odd presentation is downright superb, and this is a lengthy title, clocking in at 6 hours for the main story, which can stretch to 15 hours for all of you completionists out there. So if you’re a fan of noir settings, quirky stories, solid presentations, and are big into point-and-click adventure games, then you should definitely check out Chicken Police – Paint it RED.

Duck Souls is the latest release from Crescent Moon, and this is a port of an indie platformer that has just made its way to Android this week. The graphics are fairly simple since this is a pixel-based game, but the gameplay is solid, albeit challenging. There are 100 levels to explore, and there’s even a hardcore difficulty for all of you masochists out there. So if you’re a big fan of portable platformers, then you’re going to want to check out Duck Souls.

Tropico: The People’s Demo is exactly that, a demo for the mobile Tropico game released on the Play Store in 2019. Why it took two years to get a demo out, I don’t know, but now that it’s here, everyone can easily check the game out without spending a dime. 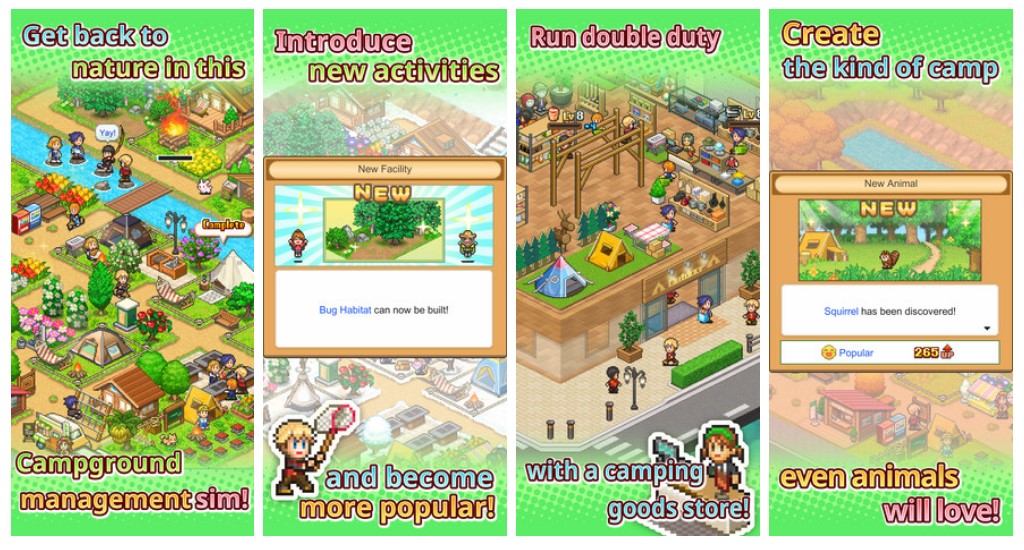 Amazingly Kairosoft is still pumping out management sims. This time around, you can expect to grow a campground or two by micromanaging each ground’s customers and activities. It’s a typical Kairosoft game, simply sporting a new theme. So if you enjoy such things, then there’s plenty to like about this title. Plus, this is a premium release absent of in-app purchases, which is always lovely to see.

Bomb Club is a fun little puzzle game where you’ll strategically detonate all kinds of bombs to get them all to explode in order to move on to the next level. It’s a simple setup, and it works well. Plus, the game is monetized properly, so you won’t have to worry about any annoyances as you play. There are hundreds of levels to explore, so there’s a good bit of content to keep you busy.

You know how Google allows all kinds of fake ads for mobile games on YouTube? Well, some crazy developer has actually made a real game inspired by the images we’ve all seen in those fake games. It’s called The Actual Game Rescue – Pull the Pin, and it’s a puzzler where you’ll pull a pin to solve said puzzles. There are 57 levels to explore, and more content is planned for the future.

Mitrasphere is the latest anime-themed game from Crunchyroll, and it’s another in a long line of RPG bawlers where you’ll tap on cards to choose your moves while fighting with a team of four. Think MARVEL Strike Force, and you’re getting close. It’s a played-out setup that’s been done to death, just with a new anime skin slapped on top. The game is also monetized poorly, showing precisely why Crunchyroll chose to enter the mobile game publishing market. Clearly, Crunchyroll sees its fanbase as a plump pocket to be picked.

Epic Fantasy is a typical gacha game that offers over 150 heroes to collect. This setup is what allows the game to be heavily pay-to-win, and worse yet, despite the gacha design, this is also an idle game. Because why actually play something when you can let it play itself after you’ve dropped a ton of funs to get past the latest grind wall. Like how much lazier can game design get? This junk is offensively bad because all it boils down to is gambling, which sure is odd for a game marketed to teens. It’s almost like Google allows this blatant abuse because it profits from it.

It would seem the publisher behind the Real Moto series has been branching out into other areas, and so Darkest Rogue 3D is the latest release from the company. This is an RPG that you’ll control through slingshot mechanics, both your character and your moves. This allows for easy control on a touchscreen, but sadly the game is filled with in-app purchases, and so the balance is poor, and the grind is annoying. Too bad, too, because this could have been a good game. Instead, it’s a blatant cash grab, just like everything else this publisher pumps out.

Rogue Land is essentially an Archero clone, and much like its inspiration, this game is stuffed with in-app purchases. Despite the title being labeled as easy to play, you will hit grind walls because this game doesn’t actually take skill to advance. Either you win easily, or you lose spectacularly, there is no in-between, and that’s because the game is balanced to suck pockets dry instead of being designed for fun, which ruins any reason to bother playing, just like every other horribly monetized F2P release in today’s list. Unsurprisingly, this cash-grab clone is lackluster.

Mafia Crime War is described by a word salad of genres. It’s an MMO strategic card game, and of course, the developer hasn’t uploaded a single helpful screenshot or trailer (now why would a dev purposefully hide what their game looks like, hmm) because this is a garbage game designed to suck up money, just like all of the other mafia games on the Play Store. So far, connection woes are frequent, and really, the whole thing boils down to building an empire, of which there are many better games available that offer a much deeper empire-building setup that isn’t plagued by bugs and greed.

Claw Stars has finally left early access. It’s essentially a claw game, much like the physical claw games in arcades. It will be your job to obtain unique items by picking them up with your claw. Of course, this is a free-to-play release, so it’s monetized horribly, all there to “help” players alleviate the game’s purpose-built grind walls, much like any F2P match-3 title. So while skill isn’t a requirement, patience or a fat wallet are.

Botworld Adventure is an open-world game where you’ll fight bots in strategic battles as you explore the in-game world. But really, this is a simple gacha title where you’ll collect bots to form a team in order to take on your many foes. You battle these foes to earn the scrap used to build more bots, creating a boring but lucrative gameplay loop. Of course, like all gacha games, the monetization in this title is awful, and the grind stinks too, which is precisely why the game’s IAPs are so lofty.

Barcode Hero Rises offers an interesting mechanic where you’ll scan barcodes to make your items and characters more powerful in what is essentially an RPG. Sadly the game is absolutely stuffed with in-app purchases, and of course, all of the typical free-to-play annoyances are present, and so you’ll have to build a base, another ham-fisted avenue for grind on top of typical RPG systems one would expect. While I love that someone is working on a mobile game that can utilize barcodes as a mechanic, the F2P design of this title stinks.

Thanks for reading! If you have an application in mind for the next issue of the roundup, feel free to send us an email and let us know.