Star Garden Games has released Sixit, a new fascinating puzzle game for iOS and Android that was available for playing.

Sixit is a narrative puzzler with a twist. You are only given six actions to perform on each run, and when you’ve used them, you start over again, with the abilities or puzzles you solved remaining. It’s a fancy idea, playing off other games like Minit and other smart roguelikes, but if there’s one takeaway you get from Sixit, it’s the humor.

You play as Pep, who is defined as simply a “mammal” and is tasked with stopping a living storm from ruining the village, interacting with many funny villagers, and solving a series of puzzles along the way. You can tell it’s a living storm because it has an eye, and the story makes sure to make you aware of that. A great dragon named Mitera once fought the storm and stopped it successfully and has since been resting from the battle. Now that the storm is back, Pep, a newcomer to the village, is somehow the only one with the ability to awaken Mitera to stave off the tenacious tempest. 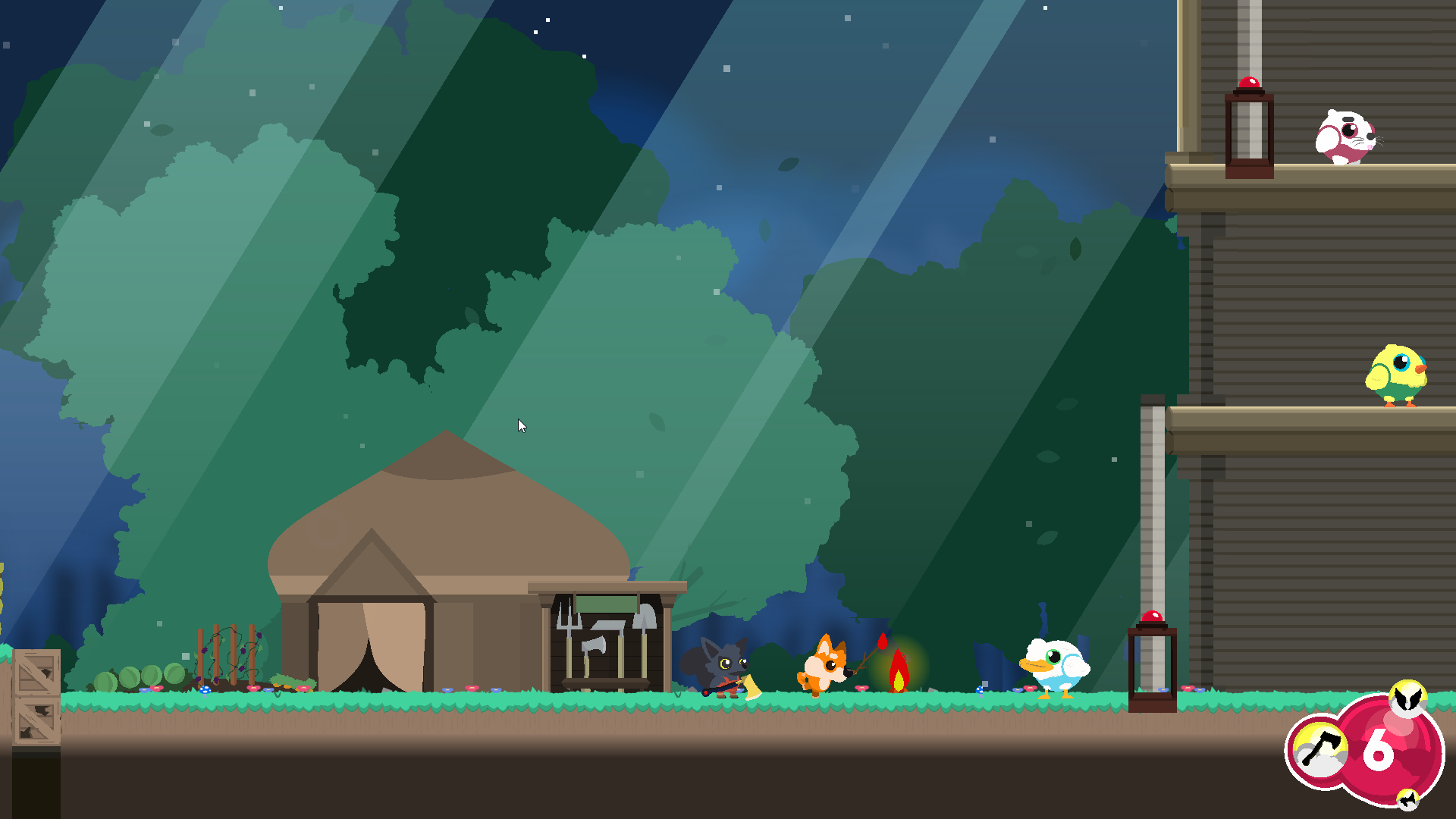 As you interact with animals in the village and work with them to solve their problems, you’ll spark up a conversation to hear the woes of each one. Not all of the critters are downright humorous in their manner of speech, but often their plight is a comical one, like an elevator service that has no customers, leaving you to speak with them and request their lift service to move up and over to a higher platform.

In the next area, you have a giraffe running a competing elevator company that is looking to provide better service and goes on in a manner of corporate acronyms and lingo. Each time you interact with an animal in a new way, they have something to say about the interaction, which is often sarcastic or a quip in dry, dark humor. It’s a joy to have writing this witty, even going as far as to break the fourth wall on occasion.

The main mechanic in the game is juggling abilities. Abilities are equipped at the house, and you pick which ones in what order you desire. Choose wisely, as even though you can have up to six of them slotted in your action button, they rotate each time you use one. For example, you could be using a megaphone called the ‘Translation Conduit’ to talk to villagers in one moment, and then be forced to use the ‘Axe of the Fallen’ on an animal or object to get it to cycle back to the megaphone. As expected, the animals aren’t particularly fond of you using a weapon on them, and they respond accordingly.

The Art of Preparation

Once you get the ability to jump with the ‘Wings of the Griffin’, the game opens up significantly, almost making Sixit feel like it’s providing you with a limited toolset in a Metroidvania-style game. Now you can bypass the elevator area, but you are presented with new problems, and of course, you can only cycle through your items, so you have to prepare wisely for your next run. There are plenty of interactions that cause you to test out what works and what doesn’t, making it a relatively light puzzle complexity level that is mildly frustrating when something doesn’t work but is severely rewarding when it does.
I can’t help but feel like the game is purposely limiting your interactions to a single button press and left and right motion to force you to figure it out or make it harder for the sake of the game being relatively short otherwise, but it would be nice to at least have the option to pick which item to use when. I get that this is the core mechanic of the game, but having small icons in the bottom corner of the screen that rotates counter-clockwise representing everything you can do once you’re out in the world doesn’t have good readability and can add to the game’s frustration at times.

You might become willing to give up the challenge if you can’t memorize what you needed to do in your current task, but thankfully, with only six actions and a relatively small interaction area, you’ll be able to get your bearings rather quickly.

There are plenty of things to keep you entertained, whether it’s just hearing what the animals think of the different abilities or finding out how to use them accordingly through play, and the world feels bigger due to the numerous combinations of how you move through it. The game has a bit of melancholy feel to it, felt through the music more than anything, but the humor keeps everything bright and cheery, regardless.

While it seems like it’s a hard balance to maintain design-wise, I always felt like working through the repetition was worth it to get to explore a new location or find out new ways to use my abilities.

There are plenty of times where it may seem like you are going around in circles, but the fun of experimentation drives the game forward and offers reward through intelligent and meticulous planning, and yet, that might not be your strong suit, so it may fall flat for you. This is a unique game of memorization and there are lots of fun things to do, but you have to be willing to stop and think about your next move.

Sixit could be considered perfect for quick play sessions for that reason, but that depends on what kind of games you enjoy. If you’re all about puzzle games and have been playing them for years, it will certainly deliver and push your skills a bit in new ways, and you’ll love the thrill of ‘just one more run.’ If you’re not a fan of bending your brain, you won’t get much out of the game as it doesn’t hand-hold you through puzzles, so if you’re stuck, you’re stuck and you’ll have to blindly try new things until you can progress.

Sixit is one of those games that takes a mechanic we’ve seen before and expands it to an entire game full of possibilities. Every time I stopped to chat with a new character or found a new way to interact with them, it was a joyful experience. The graphics are crisp, the colors are well defined, and the accentuated proportions of the animals add to their cuteness. If you are looking for a new type of puzzle game to play, this will certainly scratch that itch for you and offer you a wonderful world full of humor and intelligent puzzle design that keeps you coming back for more.