While there’s not a lot of news about the next God of War game, some details have already been teased. Let’s point out what hints have revealed as of present.

With each passing day, it seems less and less likely that God of War: Ragnarok will be coming out in 2021. But fans haven’t given up hope, and as Santa Monica keeps reiterating, Ragnarok is coming. Gamers are hopeful for a 2021 release date, but it’s much more important that the game is ready for mass consumption before it is released. Director Cory Barlog commented on this, saying that the game will come out when it’s done.

In the meantime, fans have been left to speculate and theorize with very little to go on. However, there are nuggets of information to be found here and there that tease what God of War: Ragnarok will be. Clues are few and far between and almost nothing is confirmed about the game, but there’s actually a surprising amount of hints about the game considering there’s been only one official announcement.

Obviously, the biggest clue about God of War: Ragnarok is the teaser trailer itself. The teaser showed approximately nothing and calling it a trailer is pretty generous. It didn’t do much other than confirm Ragnarok was coming, which gamers already knew because the previous game did nothing if not tease Ragnarok.

The teaser showed the God of War logo in an icy blue, with Norse runes scratched into it. Fans were quick to confirm that the runes spelled out “Ragnarok,” which is how the game has been unofficially titled since. Kratos also has a brief voiceover in the trailer, but the gist is basically “prepare yourself,” which he says all the time.

Fans generally believe that the next God of War game will be called Ragnarok, but the official title actually hasn’t been revealed. While it would be amazing if the next game’s finale is the destruction of the Aesir and the end of times, some have suggested that the “Ragnarok is coming” mantra may have a similar purpose as Game of Thrones’s “winter is coming.”

For those unfamiliar with the HBO series, winter was coming for six or seven years before it finally arrived. If that’s the case, fans might have to wait a little longer than expected to see the epic battle between Thor and the World Serpent. Hopefully that’s not the case, otherwise, all the hype surrounding the game could make Ragnarok feel a little bit anticlimactic.

After completing the main story of God of War, Fimbulwinter begins and signals the beginning of Ragnarok. The death of Baldur, the final boss, is the catalyst that starts the long chain of events leading up to the end of time. It’s pretty clear that Santa Monica Studio had a plan for the story given how heavily Ragnarok was teased throughout the game, and the secret ending confirms that it’s coming soon. In three years, to be exact.

If the player decides to go back home and rest after completing the main story, Atreus has a vision of Thor paying them a visit at the end of Fimbulwinter. This is a huge clue for what Ragnarok will include because Atreus is pretty reliable as far as visions are concerned. It’s revealed at the end of God of War that Atreus is part Frost Giant, and the Giants, Faye in particular, are known for their ability to look into the future. It’s all but certain that Thor will appear at Kratos and Atreus’s doorstep just as he did in the vision.

Thor’s motives are also fairly predictable. Considering Kratos killed his sons, it makes sense that he would want revenge. But why wait until the end of Fimbulwinter? It’s very probable that there’s a lot more to Thor’s appearance than meets the eye, and Santa Monica could be setting up for some major twists.

Odin is famously searching for a way to avoid his fate in the upcoming conflict, and perhaps Thor is there to request help. Judging by the way he reveals Mjolnir at the end of the scene, though…probably not. While Thor’s motives aren’t confirmed, he’s probably not there for a friendly chat, and the secret ending has a ton of implications for Ragnarok.

Red Dead Redemption 2’S Roger Clark Is Rumored To Be In The Game, Possibly As Thor 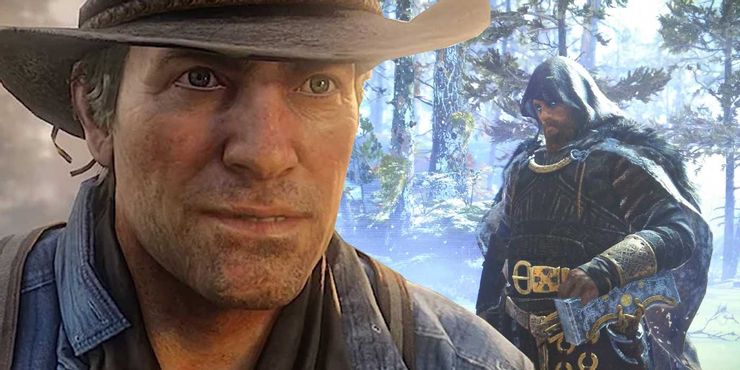 Back in January, observant fans noticed Roger Clark post recruitment information for Santa Monica Studios on his Instagram page, causing many fans to believe he’s in the upcoming game. As many have pointed out, it’s not unlikely. Clark won Best Performance at the 2018 Game Awards for his role as Arthur Morgan in Red Dead Redemption 2, which had to have gotten Santa Monica’s attention.

If Roger Clark is in God of War: Ragnarok, he won’t be playing some random side character. Players think he could be Odin or Thor, with a preference for the latter. It’s not difficult to imagine Clark as Thor; his performance as Arthur Morgan showed an incredible range. He could certainly pull off the intimidating character players believe Thor to be, but he could also humanize the role in a way that could strengthen the narrative.

However, it hasn’t actually been confirmed that Roger Clark is in God of War at all, and the actor has neither confirmed nor denied the rumors. He spoke about the rumor recently with Dan Allen Gaming, saying that he is involved in some video games, but not confirming which ones. Clark also spoke openly about the source of the rumor, and while he didn’t say outright that he was or wasn’t in God of War: Ragnarok, he said he felt like the rumor was a bit of a stretch.

Clark didn’t show anything specifically related to Thor, he just posted general Santa Monica recruitment information. His reasoning, he said, was because he wants his followers to see opportunities to get involved in the video game industry. To go from that to saying he’s playing Thor in Ragnarok is a pretty big leap, so while Clark would be a great casting choice for Thor, it’s possible he’s not involved in the project at all.

At the beginning of May, God of War Cory Barlog changed his Twitter header to an image showing characters from the first game sitting down for a feast. Interestingly, the image includes several characters who are dead: Baldur, Magni, and Modi. Their presence could be significant because many fans believe God of War: Ragnarok will do something with time travel. This has been done in the God of War series before, but there are a few clues in the first game hinting at this.

The most obvious clue comes from Norse mythology itself, and is referenced in the game. Jormungandr, the World Serpent, is a child of the Norse god Loki. Atreus was revealed to be Loki at the end of God of War, so that doesn’t seem to work out, but there’s a catch. During Ragnarok, Thor and Jormungandr are fated to destroy one another, and while the World Serpent doesn’t die, he is thrown back in time to a period before Ragnarok. So, the serpent in God of War has already seen Ragnarok.

If Loki is the father of the World Serpent in the God of War universe, some kind of time travel will have to take place. While Santa Monica has taken some necessary liberties with Norse mythology to work in the story of Kratos and Atreus, Jormungandr did tell Mimir that Atreus seemed familiar to him, so it seems the developer will be consistent with that detail. Time travel might be the only way to make that possible.

The other significant detail in the image is the goblets. There are nine goblets, each of them bearing a rune for one of the nine realms. Players visited many of the realms in God of War, but it’s likely that more will open up in Ragnarok. The goblets are strategically placed around the table, but the most interesting is Svartalfheim, the homeworld of the Dark Elves. The Svartalfheim goblet is spilled over while all the others are upright. This detail could be significant, especially since Svartalfheim was closed in God of War and the video game series isn’t likely to leave any realm unexplored.

Atreus Could Be A Playable Character In God Of War Ragnarok 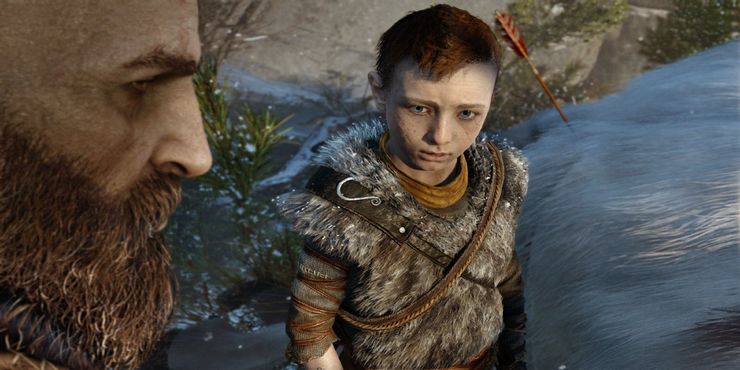 Fans have been speculating about the possibility of Atreus becoming a playable character in Ragnarok since the game was announced. If the game picks up at the end of Fimbulwinter, which is the most probable guess, Atreus will be about fourteen. He’ll have had three more years to develop his skills and learn what his powers are as a god, and because everyone knows that Ragnarok is coming, it’s unlikely that Kratos went easy on training him. There are a ton of gameplay possibilities here.

While nothing has been confirmed, one of the God of War developers teased Atreus being a playable character, saying that the team has taken some inspiration from The Last of Us 2. Specifically, he referenced the way that the narrative was split up between Ellie and Abby’s perspectives. The team may have toyed with the idea and moved past it, but it seems very likely that Atreus will be playable at some point in the game. Given the context of what might happen in Ragnarok, it gets even more interesting.

In Faye’s mural at the end of God of War, Kratos saw a depiction of himself dying, Atreus at his side. It’s unclear in the image if Atreus is mourning his father or if he’s the one killing him, but if it’s the latter, God of War could use Atreus’s perspective to humanize him the same way Naughty Dog used Abby’s perspective. After all, killing an iconic character like Kratos wouldn’t be easily forgiven.

Hopefully Atreus doesn’t kill Kratos; enough children have tried to kill their parents in God of War games, but players are looking forward to the possibility of Atreus coming into his own and growing as a character. Maybe that will include being playable.

God of War: Ragnarok is scheduled to release in 2021 for PS5.