Welcome to the roundup of the best Android and iOS games that went live in the Appvn the previous week!

Today’s list is broken up into several segments, ranging from best, average, to mediocre. So whether you’re looking for the best games of quality or are simply looking for the latest free-to-play gacha titles, you’re covered. This week I have two slick platformers and a golf game that’s definitely worth checking out, amongst a solid list of other quality titles. So without further ado, here are the new and notable Android games released during the last two weeks.

Where’s Samantha offers a visual style that’s similar to Yoshi’s Woolly World, where you’ll explore a world made up of yarn. It’s a striking graphic style, and it fits well with the game’s theme, where you fill the role of two knitted fabrics platforming their way across the game’s puzzle-filled stages. You can swap these characters on the fly, which is a primary mechanic in solving the game’s many puzzles. All in all, this is a solid platformer that works great on mobile that should last most players four or five hours. Best of all, you can try before you buy, which is always appreciated.

Mimelet is another platformer that’s launched this week, and it plays similar to a 2D Mario game, where you’ll platform to the end of a stage while jumping on the heads of bad guys and avoiding obstacles. The pixel graphics are cute, the touch controls are solid, and the level design is pretty good. This is a game that both children and adults can play, and it’s great for short sessions during any downtime. Even a few puzzles are mixed in that keep the gameplay fresh as you platform your way to success.

Tower Hunter: Erza’s Trial looks a lot like a Metroidvania title, and if you didn’t read the game’s description, that’s more than likely what you’d come away thinking. This is actually a roguelike, and it’s pretty shallow, which is why the Steam reviews aren’t great. Still, roguelikes and repetitive play are something mobile is suitable for, seeing that you can play anywhere, and so Tower Hunter: Erza’s Trial is much more appropriate on mobile than PC. Seeing that the entire point is to grind your days away as you slowly progress, this is one you’ll revisit throughout the day. While it’s not the best roguelike Metroidvania out there, it’s still enjoyable in short bursts if you’re looking for something casual, plus it’s monetized appropriately.

This is a simple game where you’ll collect passengers as you snake your way across a seemingly endless highway. The goal is to collect as many passengers as possible while avoiding all obstacles. It’s an incredibly simple setup, but there is some casual fun to be had. Luckily the game isn’t monetized yet, and there are no ads either, so it’s free to take a look if searching for a new casual game to dive into.

STARENA is an early access release from Lemon Jam Studio, and it’s something of a boss-rush game, where you’ll battle big baddies in arenas in order to become a champion and fan-favorite warrior. The touch controls are fine, though movement feels pretty stiff, and thanks to the camera’s angles, it can be difficult always to know your position, meaning you will miss a few of your shots. Of course, STARENA is still a work in progress, so here’s hoping the title is polished further in the coming months so that the game’s battles are less of a chore. Even so, the game is fun despite the fact it’s clear it’s not fully finished just yet. 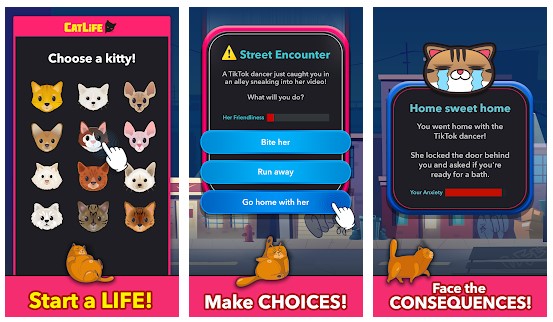 Okay, so CatLife: BitLife Cats is a reskin of DogLife – BitLife Dog Game, and since the DogLife game also contains cats (if you have Topdog), many players feel the developer is double-dipping. While that may be the case, CatLife is a fine enough title in its own right, offering enjoyable text-based simulation gameplay, just like DogLife, but with a cat theme. This way, if you prefer cats as pets, you can jump directly into the title that interests you. While the developer could have just added more cats to DogLife in an update, a stand-alone title is more convenient if you’re new to the series. 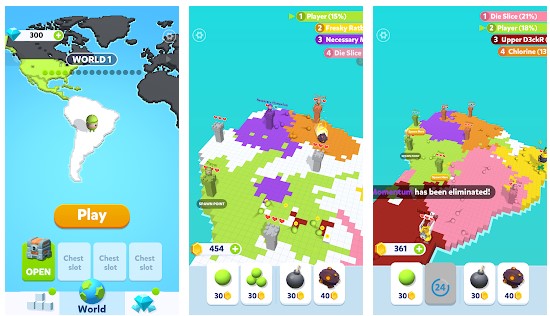 VOODOO might not be the most respected publisher, but the studio still manages to release a few games that aren’t half bad every once in a while. Pixel Hit is one of those games. It combines the guesswork of Battleship with the strategic monopolization of land ala Risk, and while this is a casual affair, there’s some fun to be had. Yes, there are ads, and yes, they are so frequent that they are annoying, but you can pay to remove them if you feel the game is worth it. So at least you can try before you buy to see precisely what Pixel Hit is all about.

Tanks Charge is extremely similar to Herocraft’s tank game Armor Age, which is precisely why this release looks like a title from several years ago. So yeah, instead of coming up with something new, HeroCraft is set on rehashing older releases under new listings. What’s even more amusing is that this rehash is filled with awful monetization, pointing squarely at Herocraft’s willingness to nickel and dime its customers with the laziest game designs possible.

Island Crossing is clearly a game designed to take advantage of the popularity of Animal Crossing. Not only is that clear from the game’s title, but all of its gameplay revolves around building and managing your own island, complete with its own residents. Of course, X-Land has figured out how to stuff such a game with endless in-app purchases, perfectly illustrating that the game is intended as a cash grab, which explains the exorbitant IAPs. So even though this is a building and management sim that offers adorable graphics, a fancy coat of paint that’s reminiscent of a much better game doesn’t mean this title is worth playing.

Even though Mirage:Perfect Skyline offers exemplary graphics, it’s a total money pit. Do you want to join a guild? Open your wallet. Want the items necessary to advance? Open your wallet. Just about everything in this game requires money, and you will be inundated with pop-ups trying to sell you something constantly. The whole thing is pay-to-win, and it’s clearly by design, which makes this an easy title to skip this week unless you absolutely have to play good-looking games that are cynically balanced against you.​​​​​​​

To update the latest game releases, check out HERE!