Warhammer 40,000 has remained a popular IP for over 40 years across the globe since being founded by Games Workshop in London. Its extensive universe has spanned a multitude of books, games and the tabletop itself. Whilst the tabletop can be an expensive hobby, it’s not the only way to enjoy the series. There have been a plethora of games released over the years that have allowed fans to engage with the franchise for less.

Also read: Reasons Why Warhammer 40000: Mechanicus Is A Good Game

The latest mobile game to tackle the beloved franchise will be Warhammer 40,000 Lost Crusade. It’s a strategy game, which ties in perfectly with the wargame setup that players of the tabletop will be familiar with. 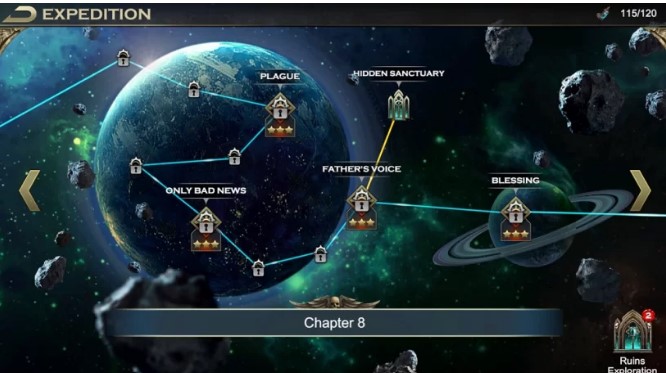 The art is very much the heavy metal-inspired look and gorgeous 3D models that have become iconic for the franchise over the years. Meanwhile, long-time fans will be familiar with the plot threads, a Space Marine Force Captain battling against the Forces of Chaos will be welcomed into familiar territory. “For the Emperor.”

The gameplay itself is an interesting and diverse mixture of strategy game mechanics, some old, some more modern. There are city-building elements at play where you’ll construct your own Space Fortress and exploration where you’ll hunt for resources to expand your troops and research technology to better quell the Chaos invasion. 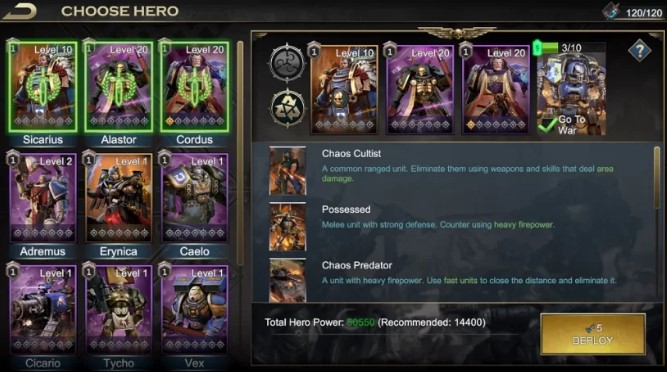 Beyond these two elements, Warhammer 40,000 Lost Crusade also implements a fun and strategic Clash Royale-style energy bar system for deploying your troops. This is the case in PvE, which you don’t often see in other strategy titles. You’ll be tactically playing cards to command your troops into battle, considering what you’re up against before making your choice.

For instance, if the enemy has deployed some Chaos Cultists, the best course of action will be to send in a Dreadnought which will be able to counter them with ease. It’s also possible to control the placement of your troops, which adds an extra layer of depth to the game. Beyond simply picking your cards you’ll also be able to select from a choice of different heroes who’ll lead your squad into battle.

Each of these heroes have their own special skills that can be cast when their character portrait is glowing. For example, with Cordus this will see him rain down powerful AoE bolts of lightning that could surely turn a potential dire skirmish on its head. Again it’ll all be down to you timing when to use these devastating abilities to be the most effective.

Both the troops you can summon and the heroes themselves can be upgraded further to not only increase their power but also add more strategic options to the game. This will be achieved through the strategy tree which has both Combat and Development branches.

These upgrades may simply increase the attack of your troops or they may also have more intriguing effects such as giving you a bulk of resources whenever your heroes use their active skill, which helps make the game feel more engaging than most of its competition.

There’s plenty of fun to be had outside of the PvE expedition mode too. Once you’ve progressed a little further into Lost Crusade you’ll discover the Star Map. Here you’ll be able to engage in a spot of PvP and Guild versus Guild alliance battles.

Currently coinciding with Warhammer 40,000 Lost Crusade’s launch is Warhammer’s special Skulls event. This is a once-a-year occasion for fans to celebrate the franchise in all manner of ways and, naturally, players of Warhammer 40,000 Lost Crusade will also have their chance to join the festivities through the game’s latest World Map Light-Up event. During the event you’ll have the chance to show your support by “lighting up” your territory for which you’ll receive a bounty of in-game resources and an exclusive name tag bestowed by the Blood God.

If you’re on the hunt for a new strategy title that promises depth and a plethora of tactical choices but is also easily accessible and ideal for gaming on the go, you can download Warhammer 40,000 Lost Crusade now over on the App Store and Appvn.