Square Enix has been slowly releasing remasters of the first six Final Fantasy titles across mobile and PC for the last few months. The last game to be released was the fourth in the series, which landed in September. This means the fifth game is next, and Square has confirmed the release date. The Final Fantasy V pixel remaster is set to arrive on Steam and mobile early next month. On November 10th, to be exact.

Much like the previous releases in the remastered Final Fantasy series, the pixel graphics in Final Fantasy V have been updated for modern hardware, and the soundtrack has been rearranged, overseen by the original composer. The UI has also been touched up to suit mobile and PC play, though players should expect the same awful font found in the previous four games. There’s now an auto-battle option to help with the grind, plus there’s a bestiary, illustration gallery, and music player for those who just want to dive into the lore and themes of the classic JRPG. 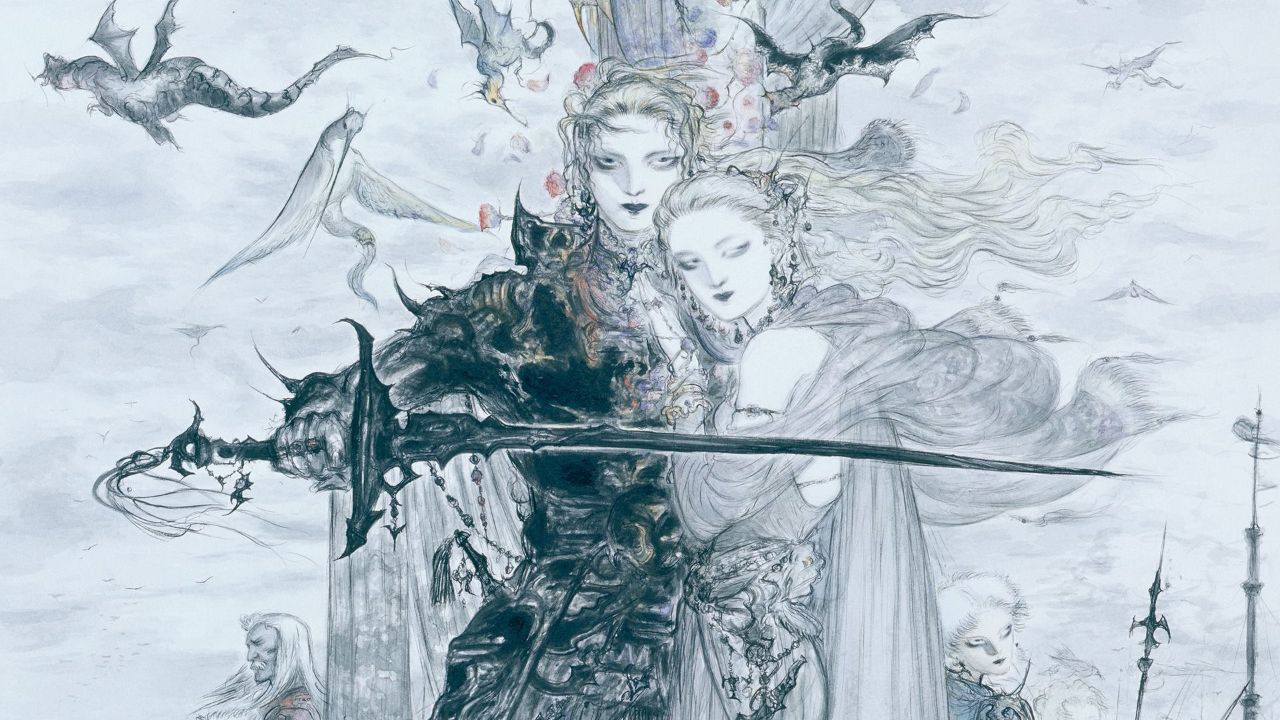 Final Fantasy V begins with Bartz hanging out with his chocobo companion Boko. Bartz is in the part of the world that enjoys a meteor season, or at least seems that way as there are a lot of meteors crashing lately.

Bartz does the sensible thing which is ride his chocobo over to the smoldering hot giant space rock to investigate and finds Lenna and Galuf. Both of them are independently eager to get to the Wind Shrine, and with no more important pressing matters to attend to, Bartz reluctantly joins them on their adventure.

Something about some elemental crystals that sounds vaguely familiar, wind stopping and whatnot. Anyhow, this seems to be shaping up to a classic Final Fantasy adventure where the elemental crystals play a major role in potentially world-ending events.

Final Fantasy V may not be a standout in the franchise when it comes to character development or story, but makes up for this with its fantastic job system. None of the Pixel Remasters are particularly difficult but if someone is looking for a challenge they can make Final Fantasy V challenging by making up bizarre party line ups with unorthodox job choices.

Conversely, with a little thought it’s also not difficult to break the game by strategizing job paths for everyone to create four demigods. The player can ultimately build whatever party they want. Everyone can max up Red Mage and then Dualcast any combination of White, Black, Blue, Time or Summon magic. Or become an army of dual weapon wielding Berserkers. Maybe thievery or other non-magic special abilities tickle your fancy.

Whatever the case, the freedom to swap jobs and equip different learned abilities allows for countless imaginable party configurations. Most players would likely balance a sensible party, but the depth for customization is impressive, especially for its time, and it ultimately makes Final Fantasy V extremely fun. The only real criticism is the baseline challenge isn’t high enough to necessitate putting too much thought into assembling the team. 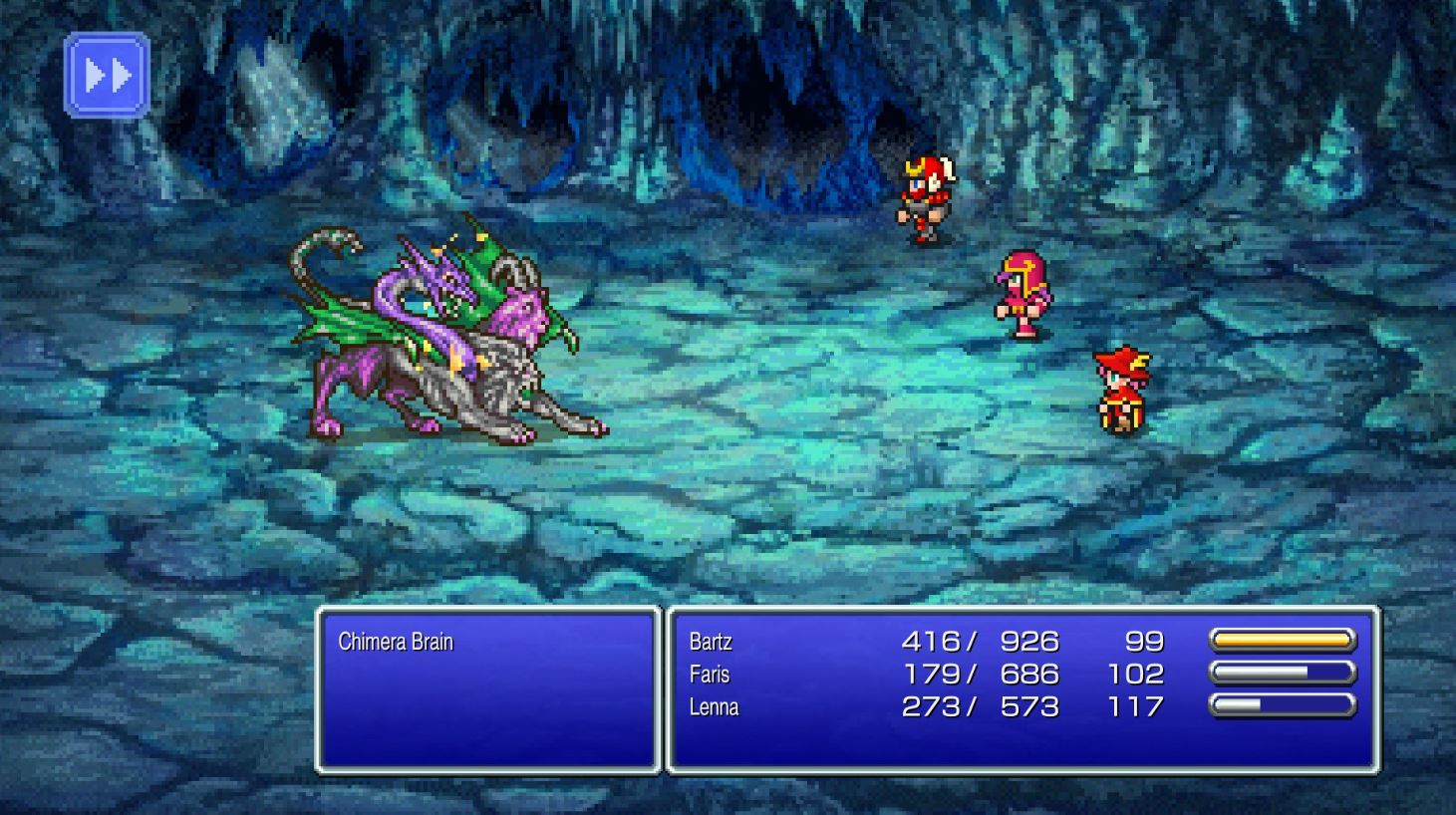 Chances are anyone reading this is familiar with the Pixel Remaster series and Final Fantasy V is comparable to the others. The graphics are re-imagined versions of the 16-bit original. Characters, monsters and environments look similar to their original incarnations but have higher resolutions and generally are technical improvements. Other effects, like bodies of water and spell animations, look like they’d be too much for the original 16-bit hardware.

This remaster is trying to bring the 29-year-old game into modern hardware while maintaining the original aesthetic which it succeeds. Like the other Pixel Remasters, most of the attention prior to release has been on the graphics, but the remixed music is the highlight.

Even going back to the 8-bit games it was always apparent that Final Fantasy soundtracks are filled with great compositions and the improved MIDI brings the music to life. One of the more recognizable tracks is Battle at the Big Bridge, or Gilgamesh’s theme as it maybe be more commonly known, which is re-imagined with distorted electric guitars and prominent trumpets.

Not sure if ska metal or mariachi metal is a more appropriate description, but whatever the adjective it sounds fantastic. Home, Sweet Home was one of the more soulful pieces in the original soundtrack and the new version seems like it would be impossible not to feel anything while hearing it. As with the other four games, a bestiary is included along with an art gallery of Amano’s sketches and a music player to enjoy the soundtrack.

Also, it’s worth noting that Pixel Remasters are based on the original games so additional content that was introduced in later releases, such as on Game Boy Advance, are not present in this version. 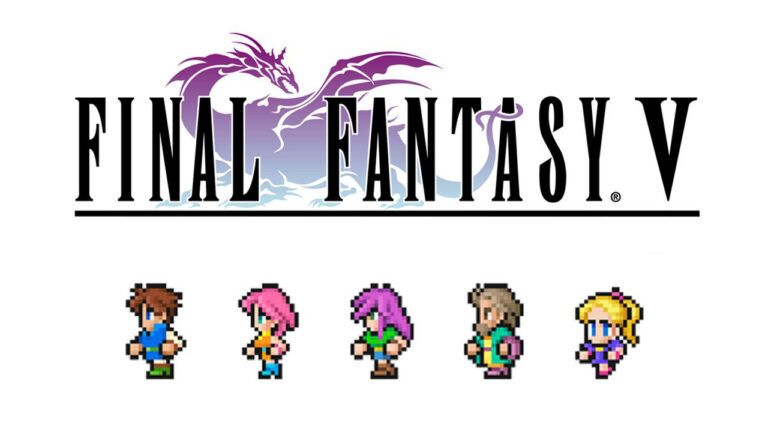 Final Fantasy V is one of the more overlooked titles in the franchise, but skipping this title would be a mistake. Its story may not reach some of the highs as other entries in the franchise, but it’s still compelling enough to keep players interested. While it might not have the best Final Fantasy story, however, it has one of the best job systems. There’s grinding involved to get some of the exceptional abilities, but the freedom to customize a party however the player wants offers many opportunities for creative party configurations and encourages multiple playthroughs.

If you’d like to take Final Fantasy pixel remaster for a spin to make up your own mind, you can grab the free install from Appvn widget below.