We all know Gris is a beautiful game. No one can deny that. But beyond the visual value, does this game deserve all the flattened compliments it got? Let’s find the answer through this topic.

Gris is a beautiful game. This is the inevitable first impression. The lovely artwork only grows more lovely the further in you get. Watercolor skies; luminescent caverns; radiant vines and flowers.

Behind all this is an equally gorgeous score. Peaceful piano tracks devolve into tempestuous dirges. In one stage, a powerful red wind buffets your character as you push across a red desert. The only warning you get is when the music begins to change, growing darker and more menacing. As the music crescendos, the gales turn the whole screen a dark crimson. As the music subsides, the wind recedes. 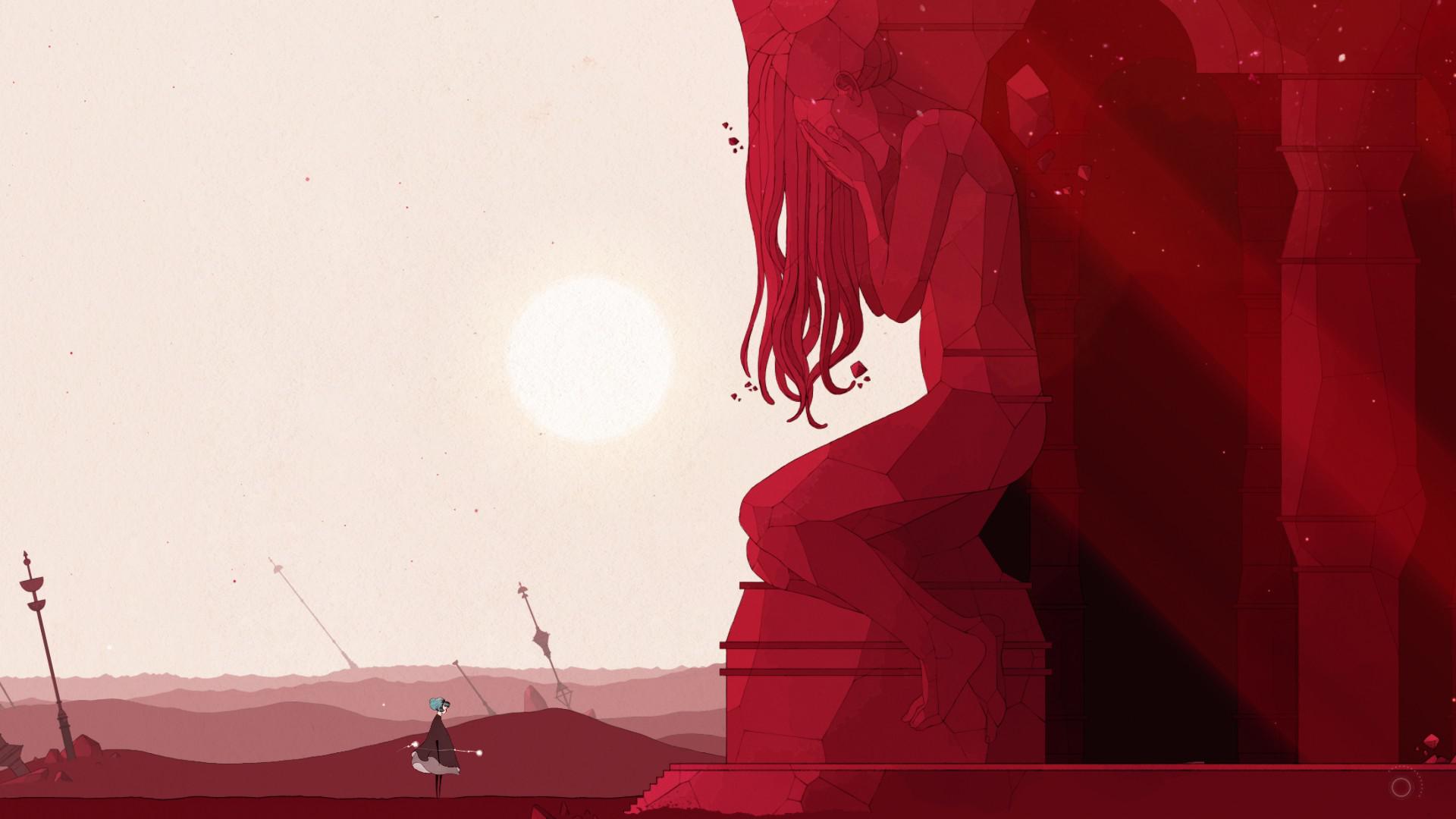 At first, the only way to avoid the effects of these powerful gales is to find shelter. It won’t kill you, of course. Fighting, killing, dying . . . these have no place in Gris. There is a villain in the story, but you can only flee from it (and use it to help you platform) but this is not a fighting game.

It is very much a game, however. This is no walking simulator, no interactive movie. Gris is a platformer with lots of very clever puzzles. It has some elements of a Metroidvania, though I wouldn’t classify it as such.

For instance, at first the red wind is only avoidable. Then you learn a special power that you can use to turn yourself into a block. Doing so makes you invulnerable to the wind. But this block power can also help you break through stone floors and as the game progresses it’s used in a number of other puzzles in interesting and creative ways. You’ll earn other powers as you progress that help you complete more puzzles and stages as the game becomes more and more elaborate and challenging. 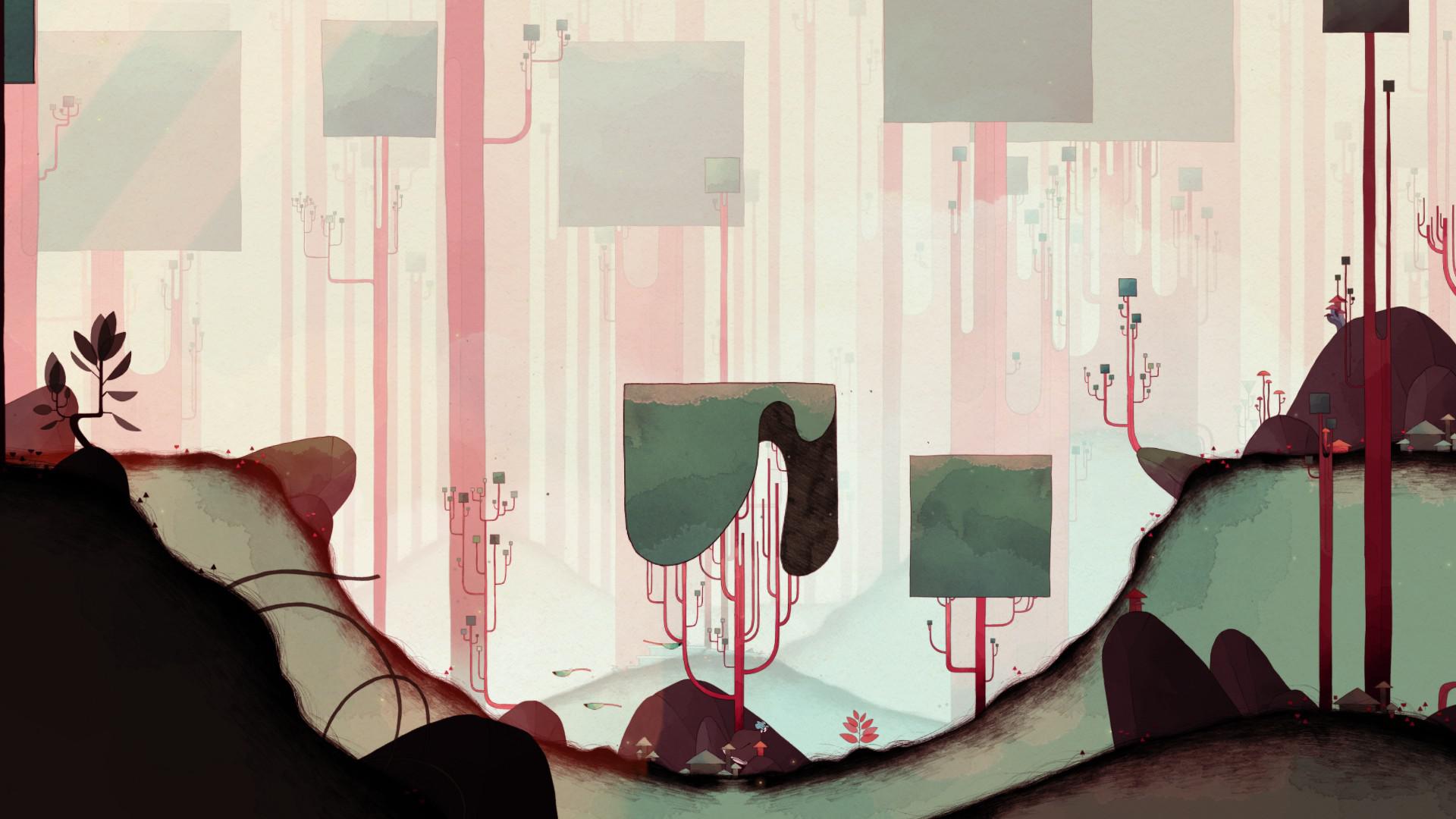 The picture above illustrates the creative ways platforming works in Gris. These blocks appear and disappear, sometimes all the way and other times in half on the diagonal. You’ll need to time out your jumps just so. Other similar blocks only change when you jump, making the timing even more precise.

As you progress you’ll face other platforming challenges, such as areas where you’ll need to use light in order to find stairs and platforms. As the light fades, so do these surfaces. 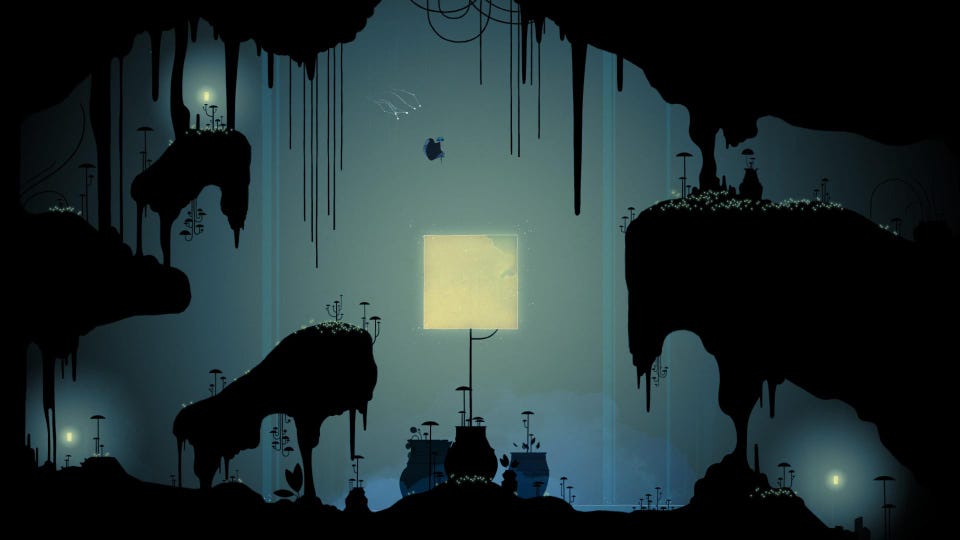 Other stages make use of entire sequences where you’ll go between right-side-up and upside-down, alternating in order to reach optional challenges and the little motes of light you’re required to gather in order to progress through each area and finish the game. 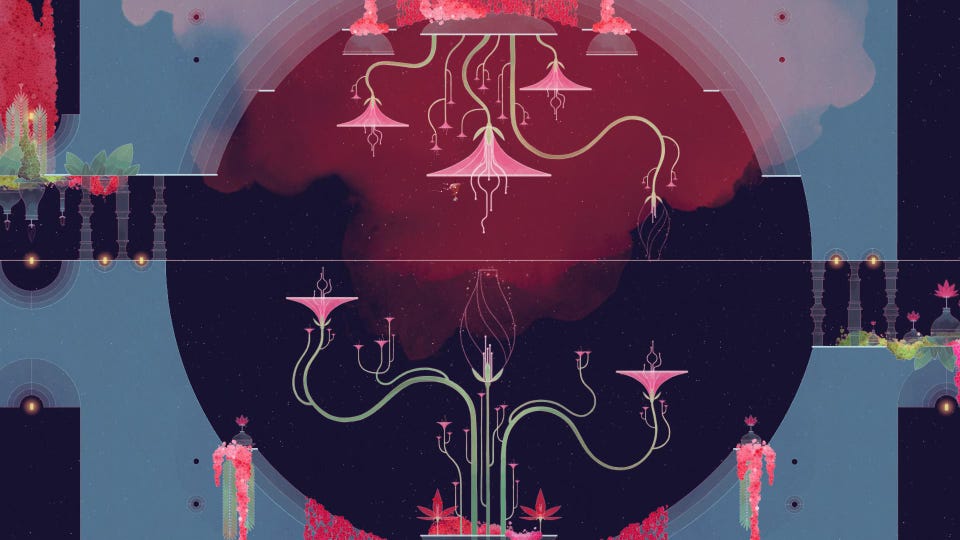 You’ll need to make use of your various new powers (none of which are particularly elaborate) in order to progress through all sorts of interesting puzzles and platforming challenges. 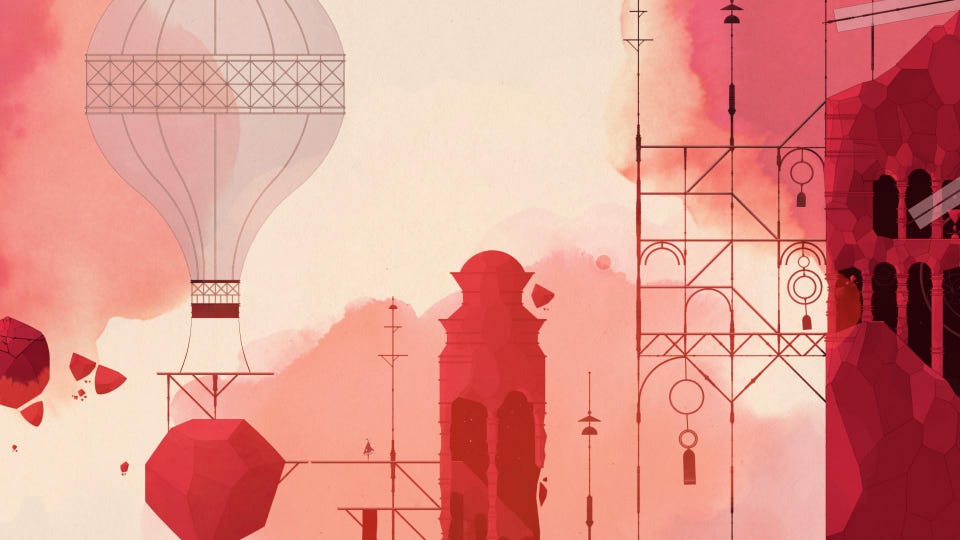 One of these powers essentially turns you into a fish, which opens up an entire subaquatic area. 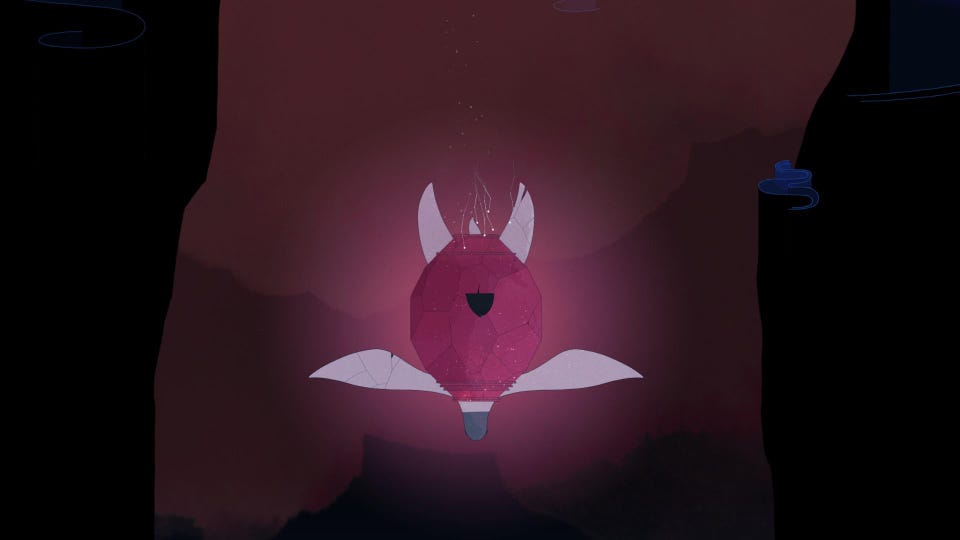 Soon you’ll find yourself in stages where you’re alternating between land and water, right-side-up and upside-down, navigating a dizzying world of color and light. 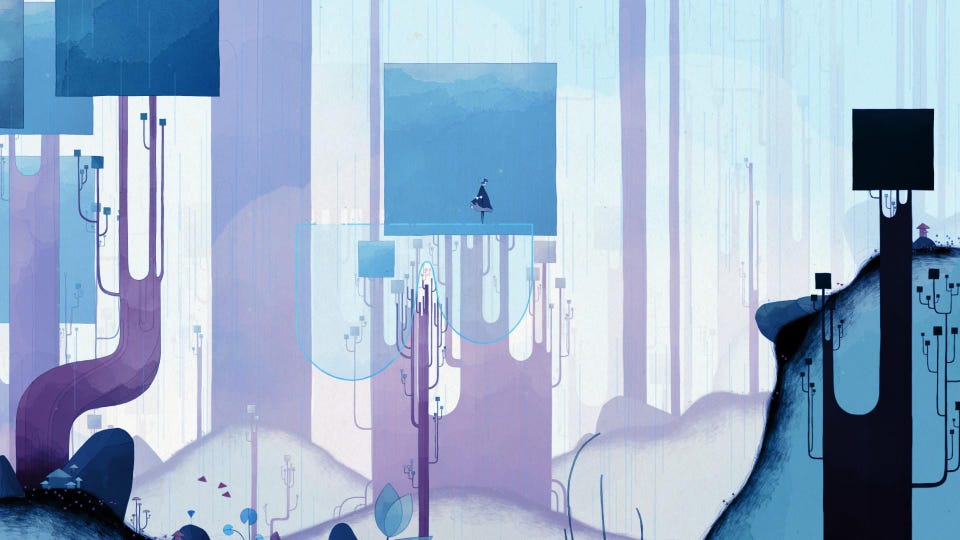 Let’s let pictures do the talking for a bit. These were all taken during my playthrough of the game on Steam, which took me about 3 and a half to 4 hours in total (I did not complete all the optional challenges but I did do many of them). 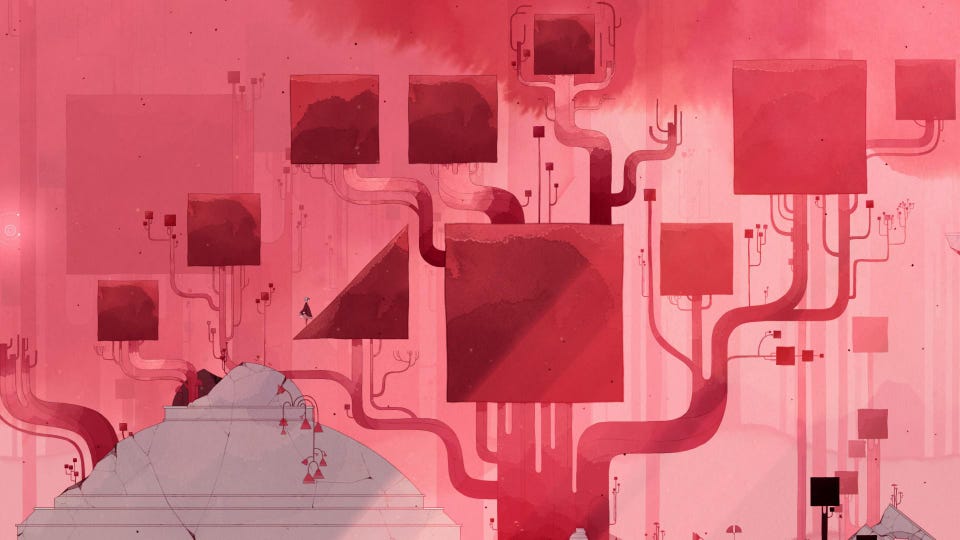 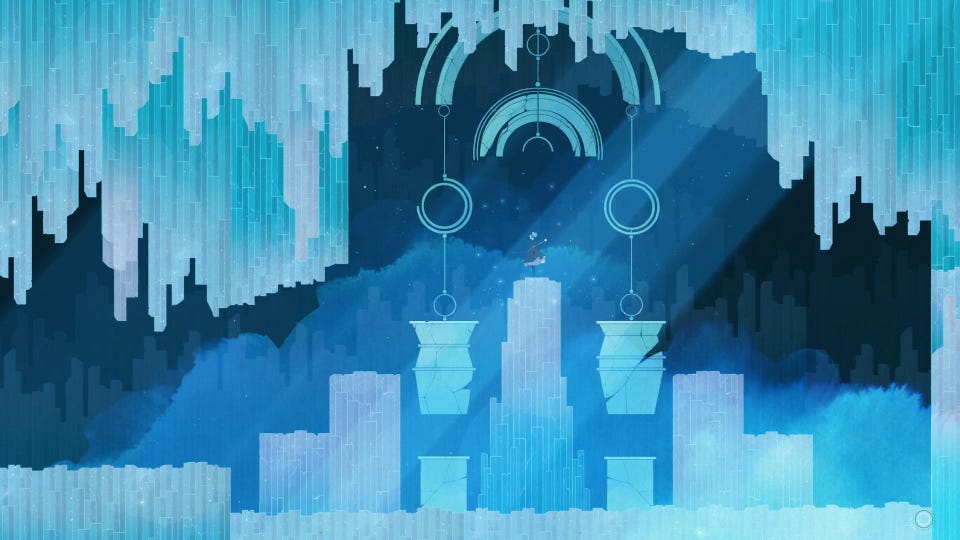 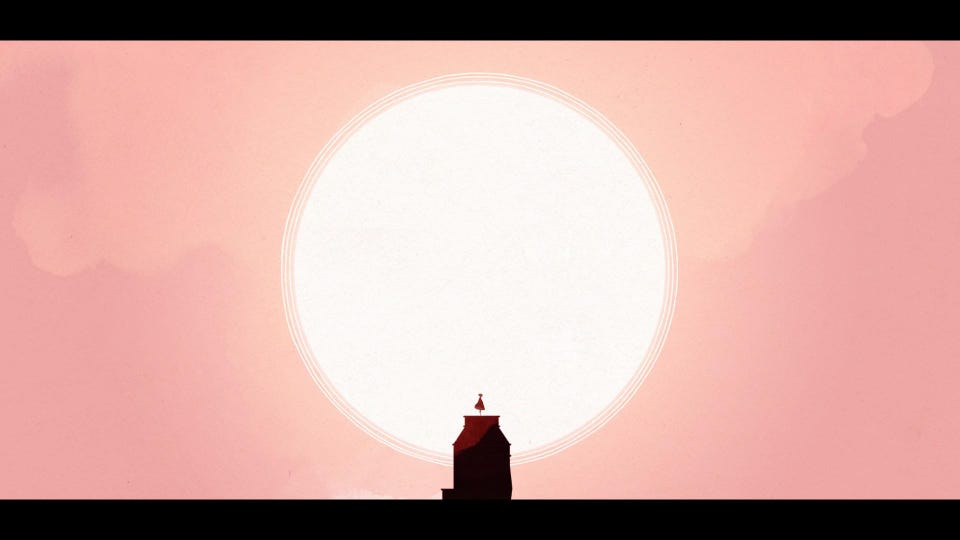 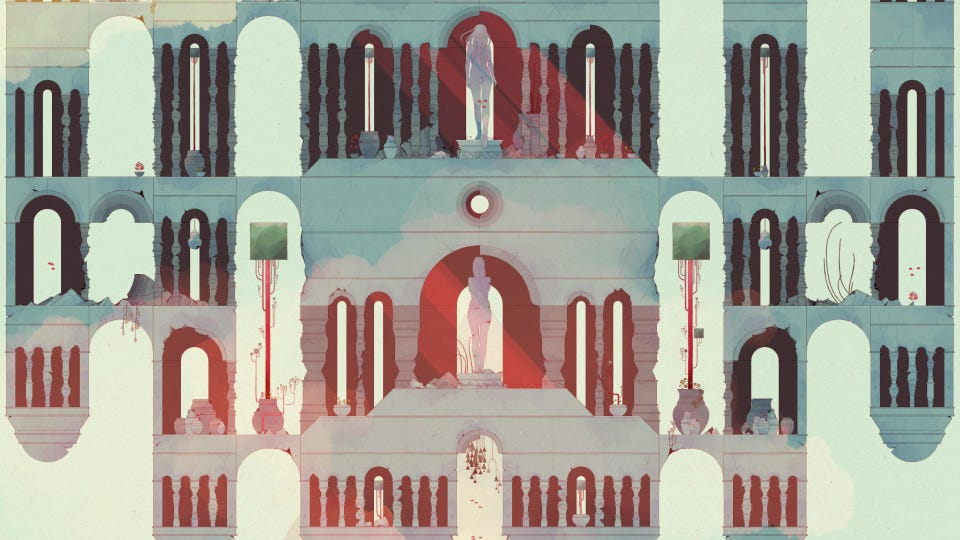 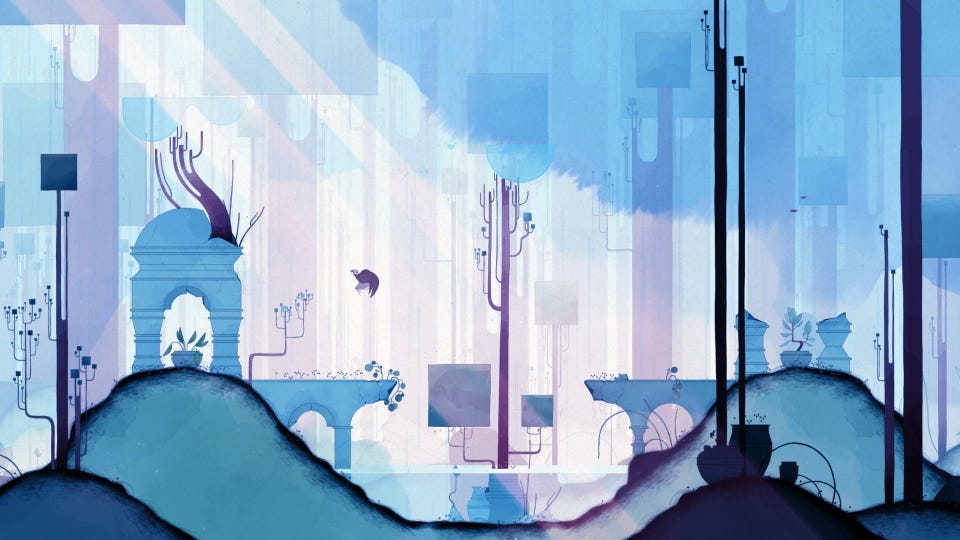 I must have taken over 100 screenshots while I played this game. Every new frame is a work of art.

Gris also tells a story, though not with words or text. There is no dialogue. There are no choices to make beyond how you solve each puzzle and stage. But there is a story.

You play as a lost girl—an inner child, of sorts—facing her inner struggles and running from her demons. I honestly don’t want to give it away. All I can say is that it’s the kind of story that is rarely at the surface of the game, but as you progress you’ll pick up on it more and more, and by the end you’ll be truly wrapped up in its outcome. I was moved to tears (I’m still not entirely sure why) for the first time in a game since I played What Remains Of Edith Finch.

And while I did love that game, I love Gris more. For one thing, it’s more of a game. Edith Finch is a brilliant story, but there’s not much game beyond exploring the old house and its tragic past. Gris is the reverse of that. It’s almost entirely gameplay with the story only in bits and pieces. Nor does it tug on your heartstrings quite so flagrantly.

At the end of each stage you’ll come to a giant statue of a woman, often in some state of ruin. This is crucial to the story, but also to the world the story takes place in. These feminine monoliths are both structure and narrative.

In this sense, the story is almost inseparable from the game’s architecture, something I admire in titles that do it well (like Dark Souls, for instance, which conveys so much of its story through its sprawling, decaying world. The two games are nothing alike other than the way they each tell stories through world design—though I think both games can help gamers who struggle in life, who face the overwhelming odds of depression or grief.)

As a side-note, Gris also contains one of the very best jump-scares I’ve ever encountered in a game in part because I wasn’t expecting it at all.

I have no complaints, though I do think this is one of those games I’ll play once and then maybe never again. There is replay value here, but that’s not really the point of Gris, either.

That being said, I could see sitting down and playing this with a friend and enjoying just watching them experience it. That’s what I’ve done with another gorgeous game with equally incredible music and artwork: Journey. While Gris is not as novel as that game, it reminds me of it quite a lot, in a good way. Indeed, if you enjoyed Journey I think you’ll also enjoy Gris. It lacks that game’s incredible multiplayer twist, but never suffers from being a solo experience.

Nor is Gris the best platformer you’ll ever play from a purely platforming perspective. Certainly there are more challenging ones (Celeste) or more action-packed titles (Guacamelee) or have more in-depth systems (Dead Cells) but Gris achieves what it sets out to do with style and elegance. It’s doing its own thing and I appreciate that. 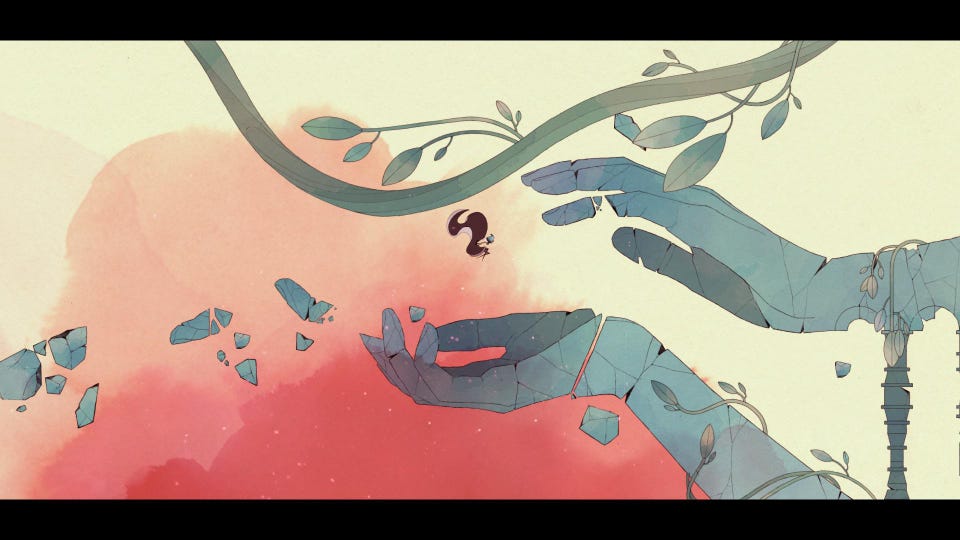 Gris is a wonderful, gorgeous puzzle-platformer with a unique art style, a phenomenal score, and a powerful yet subtle message. I was engaged from start to finish, unable to set it down (though I hadn’t planned to play through an entire game in one sitting.) The ending is surprisingly poignant for a game with no dialogue and no text. The journey to that ending is endlessly creative and fun.